Home school homework help Do the vikings deserve their bad

Do the vikings deserve their bad

In this day and age you would get a completely different answer from what answer you would get if you ask someone alive during her reign so there is a big dilema. 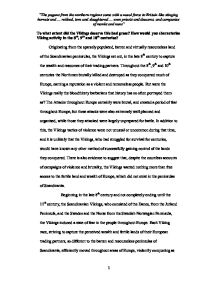 An exhibition at the British Museum aims to improve the reputation of the Vikings Image: But it looks like the Vikings had a bit of a bad press — well, three centuries of it — thanks to the understandably-miffed monks whose monasteries they looted.

Now, a stunning new exhibition at the British Museum is redrawing the cartoon caricature of these Scandinavian savages to reveal them in a fascinating new light. They were a contradictory bunch — shameless raiders yet shrewd traders; pagans yet culture vultures; smelly soap-dodgers who hated messy hair; and testosterone-fuelled warriors who believed girl-power won their battles.

Disney We should also banish the idea of bearskins, matted whiskers and shell necklaces. It seems they were more into silk cloaks, groomed beards and bling. Well, how else would a Romantic depict a Viking?

Were the Vikings really that bad? by Chelsea Singbeil on Prezi

I defy anyone to look at the beautifully crafted artefacts in the exhibition and tell me these were barbarians. The Roskilde 6 Image: Paul Raftery The Vikings were the original social rebels — the punks or Hells Angels of the years But before anyone goes soft on them, Gareth adds: They were slave traders and brutal warriors.

They traded amber, whale bone, furs, weapons, wine and jewellery. But whether raiding or trading, the Vikings had to look dapper. A 10th century gold neck band Image: Their solid-gold toiletry sets included delicate ear spoons for scooping out wax.

Viking men were also heavily tattooed but their most striking and fearsome fashion statement was their gnashers. They would file horizontal lines into the enamel on their front teeth and paint in red resin. Legend has it they went into battle naked and gnawing their shields — as depicted by some of the 12th century Lewis Chessmen pieces at the museum — and believing they had transformed into bears.

They were said to have worked themselves up into a feel-no-pain frenzy with the help of henbane, a hallucinogenic plant. But while shape-shifting was a Viking belief, Gareth thinks they were just high on adrenaline, carrying bear claw charms and showing bear-like ferocity — rather than actually being bare.

Weapons and armour were huge status symbols. Vikings gave their ornate swords names like Legbiter but when a warrior died in battle his sword was ritually killed too — bent double, and interred with him.

Swords have also been found in the graves of women of the Viking era. It led to speculation they were warriors too. The Vikings believed in Valkyries — terrifying female spirits of war — however, Gareth is not convinced there were female soldiers.

He thinks the weapons may have been heirlooms buried with the last in a family line.

Were the Vikings all bad?

But Viking women were quite independent. They could own their own property and controlled the purse-strings in the marital home.Their constant military success was not only due to their advanced, well-built warships; the bloodthirsty and relentless nature of the Vikings sent fear to all of their victims, ma king victory easily obtainable.

Today, as a result of this harsh reputation, our 21st century American society depicts the . By focusing on the violence of Viking society, the new exhibition revives the traditional image of Vikings as Dark Age bad boys—Pillage People, if you will, who bullied Britain and France, and.

The Vikings may not have smelled good, a contemporary chronicler called them “the filthiest of God’s creatures, never washing themselves”, but hair was another matter. “They took their grooming very seriously and combs are one of the commonest grave finds,” Gareth explains.

The Vikings absolutely did not deserve their bad reputation. Vikings were naturally born raiders. In order to survive, the Vikings had to steal from others since they were unskilled in farming. already exists as an alternate of this question. Would you like to make it the primary and merge this question into it?

Were the Vikings really that bad? by Chelsea Singbeil on Prezi